BabyYumYum.co.za
Home Articles Parenting Why your child picks their nose & how to get them to... 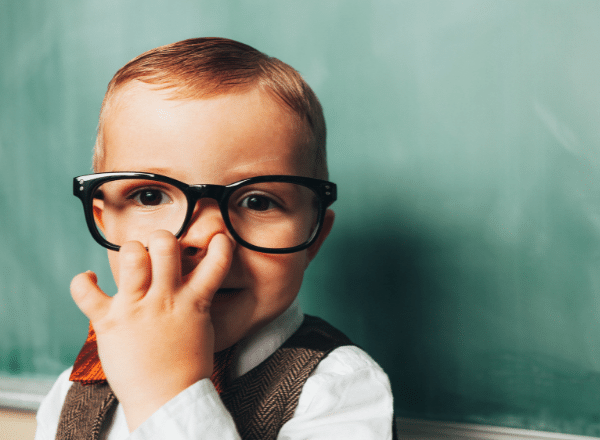 Let’s start off by saying that it’s perfectly normal – and extremely common – for a child to pick their nose. Is it unsightly? Yes. A bit gross? Certainly. Something to be seriously worried about? Not really. But it is a nasty habit and it’s worth trying to get your child to stop – unfortunately, nose picking is a notoriously tricky habit to break.

Why children pick their nose

The are many reasons kids might pick their nose but the most common causes are:

Discomfort. If a child has hardened mucus (snot) in their nose, it’s uncomfortable and they’ll naturally want to take it out. Unfortunately most kids either then wipe what they’ve found on the couch, on their clothes – or they eat it! Yuk.

Boredom. It gives them something mindless to do with their hands. You’ll be able to tell if your child is picking their nose out of boredom if you only really see them do it while they’re doing something passive, like watching TV or when they’re in the car for long periods of time.

Stress or anxiety. If your child’s nose picking behaviour is coupled with other habits that are common indicators of anxiety, like nail biting, it might be worth seeing a medical professional for advice on how to best manage their stress levels.

Habit. They may have started picking their nose after they recovered from a cold where they had lots of hardened mucus in their nose, but now it’s just a habit that’s quite hard to break.

Why should you stop a child from picking their nose?

It’s bad manners. While this sort of behaviour is tolerated in toddlers and small children, it’s not socially acceptable for older children, teens (or adults!) to pick their noses.

Hygiene. It can spread germs and infection and – in a time of Covid, in particular – this should be discouraged.

Health concerns. The nasal passages or skin surrounding the nose can get damaged by repeated digging, and these sores will be slow to heal as they’re constantly picked at. 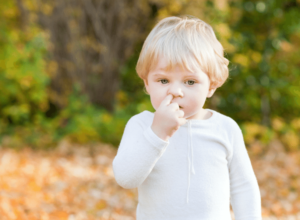 How to stop a child from picking their nose

Talk to them about health concerns. Explain that nose picking can spread germs that could make them sick – and encourage them to wash their hands regularly (especially after they’ve been picking!).

Address the cause. Perhaps your child has seasonal allergies and there’s a constant build up of mucus, which is why they keep picking. Determine if this is a contributing factor and see a doctor for advice on treating the cause of the snotty nose – a saline rinse or nasal spray may help ease their discomfort.

Try a reward. A rewards chart – or another agreed-upon reward – for ‘no nose picking’ days might be the motivation your little one needs to kick the habit.

Distraction. If they pick their nose out of boredom, or because they’re anxious, you could try giving them something like a fidget spinner or pop-it that will keep their hands busy.

ALSO READ: Signs your child might need to see a speech therapist or audiologist

Create a physical barrier. Many parents have had success by wrapping their child’s fingers (usually just wrapping the forefingers is enough) with plasters so they can’t comfortably be inserted into a nostril. Although it doesn’t tend to be the most effective method, this is a great first place to start – fingers crossed it works!

Discourage the behaviour. While you want to discourage the nose picking, be careful not to criticise your child harshly. Some children can feel very sensitive about these things and will start to worry that they’ll “get into trouble” if they’re caught picking their nose – remember when talking to them that it’s the behaviour that’s “yucky”, not the child.

Ignore it. If you’ve tried to nip the nose picking in the bud but haven’t had any success, this may be a bad habit that you just have to ride out. It’s rarely dangerous and most kids do grow out of it… eventually.