BabyYumYum.co.za
Home Influencers Travelling overseas with a baby? Best you have a sense of humour!

Himself and I were trying to take a tour of the Alcazar, one of Spain’s famous palaces. When we had first approached the castle, Slytherin Baby leaned forward, head cocked, eyes wide as she stared in fascination at the carvings on the wall, soaking in the atmosphere like a seasoned traveller. I was so proud. Slytherin Baby seemed to be getting a real taste for international travel.

And then we entered the palace.

“I am afraid you cannot take a crying baby on the tour.” The tour guide seemed to be trying to sound apologetic while he watched Slytherin Baby flail, arch, scream and grab at the heavy brocade curtains that lined the windows.

“No problem,” I repeated as I dodged one of her kicks, tried to unwind the pram strap that had somehow managed to get snagged around my neck and unhook Slytherin Baby from the curtains she was now trying to climb like a cat confronted with medication.

“The tour starts in two minutes.”

“No problem,” I hissed, trying to contort my kid into the baby sling, while she did her best Jackie Chan impression – kicking, punching and screaming incoherently.

“What can I do?” asked Himself, hovering over us.

“Dummy!” I ordered. Slytherin Baby grabbed a hunk of my hair and yanked.

“Where did you put the dummy? I don’t know where to look!”

“I cannot hold the tour for you, we must start on schedule,” insisted the tour guide.

I dropped the baby sling, clamped my squalling infant firmly under my arm, reached my free hand into the nappy bag and produced the dummy. I glared at my husband, my child and the tour guide in turn. The men backed away; Slytherin Baby opened her mouth to yell at me some more. I pushed the dummy into her mouth and held it there, stifling her next round of complaints.

I slid into the back of the tour group, separated from Himself by a gaggle of Americans, just in time to hear the story of the Portuguese queen who had lived there hundreds of years before. Slytherin Baby and I looked at each other.

“Don’t even think about it,” I hissed. “You might be Portuguese, you might have the same name, but you are not a queen.” Slytherin Baby merely looked down her regal little nose at me.

For the next 20 minutes, I had one hand clamped firmly around my daughter who wriggled, arched and craned around, trying to see everything she could, and the other hand alternatively trying to keep the dummy in her mouth and stop her grabbing priceless artifacts. I tried not to take it personally that the palace’s security guard trailed us like an unamused shadow, watching my daughter’s grabby little hands.

Slytherin Baby’s larceny tendencies aside, we didn’t seem to be disturbing anyone too much. Until we entered the portrait gallery. Here the tour guide started to tell us more about the life of the queen. I relaxed my grip for half a second and Slytherin Baby managed to spit her dummy onto the floor. Checking quickly to see if Himself or the Americans had noticed, I dove down to pick it up, brushed it twice against my pants and was about to shove it back in her mouth when Slytherin Baby, glaring at the guide, suddenly screamed, “Bwwaa, raaah, GHA!”

“Stop it!” I hissed, trying to move backward, away from the group, but found my way blocked by a bunch of unamused Germans.

I shoved the dummy back in her mouth and whispered furiously, “Don’t you dare use those words!” convinced my daughter had just been cussing in baby talk. The tour guide shot Slytherin Baby a nervous look, which she returned with a black glare, and he hurried to the next room.

“Ghwa dah,” she muttered softly, staring at a portrait of the queen and her family as the security guard and I followed the group.

“Well that was fascinating,” said Himself, when we ended the tour and entered the courtyard.

“Bwwaa, raah, gha,” I muttered under my breath and shoved Slytherin Baby back into her pram. She alternated between glaring at the tourists and staring at the fountain in the centre of the courtyard.

“What was that?” Himself asked.

“Nothing,” I replied. “Do you believe in reincarnation?”

“No reason,” I replied, looking at Slytherin Baby, who was gazing wistfully at the castle entrance.

What we really want for Mother’s Day during lockdown – a day off!

“Talking to my plants & other things I do during lockdown”

What we learned when travelling with our Slytherin Baby 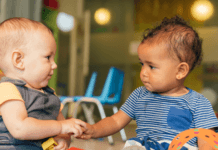 The myth of balance