Home Articles Babies & Toddlers Postnatal depression: Men get it too

Over the past few years, there has been an increase in media reports about postnatal depression and other maternal mental illnesses, and campaigns have led to greater understanding about the need for more specialist services. Although this is encouraging, very little is said about fathers. But men can get postnatal depression, too.

Currently, only mothers can be diagnosed with postnatal depression. The psychiatrists’ “bible”, the Diagnostic and Statistical Manual of Mental Disorders (DSM-5), includes a diagnosis of “peripartum depression”. Peripartum depression is a form of clinical depression that is present at any time during pregnancy, or within the four weeks after giving birth, although experts working in perinatal mental health tend to be more flexible, extending that period to the first year after giving birth.

In many ways, postnatal depression varies little from traditional depression. It, too, includes a period of at least two weeks where the person experiences low mood or a lack of motivation, or both. Other symptoms include poor sleep, agitation, weight changes, guilt, feelings of worthlessness, and thoughts of death and dying. But the biggest difference is that a depression at this time involves a significant additional person: the child.

Evidence suggests that the long-term consequences of postnatal depression on the child can be damaging, including developmental problems, poor social interaction, partner-relationship problems and greater use of health services (including mental health services).

Around 7-20% of new mothers experience postnatal depression. A common view is that it is caused by hormonal changes. Although this is partly true, it is far more likely that life factors are responsible, such as poverty, being younger, lack of support and birth trauma. Another potential cause is the sudden overwhelming responsibility of having a baby to care for, and the life changes that it entails.

Depressed mothers also feel intensely guilty about the way they feel about their baby, and fear shame and stigma from society. As a result, at least 50% of mothers will not report a mental health problem. Other mothers will not tell their health provider out of fear of having their child taken away by social services.

All of the above factors can equally apply to fathers. But there is no formal diagnosis of postnatal depression for fathers. Yet evidence from several countries, including Brazil, the US and the UK, suggests that around 4-5% of fathers experience significant depressive symptoms after their child is born. Some other studies claim that prevalence may be as high as 10%.

The cause of these feelings in fathers is similar to what we see with mothers, but there are extra complications. Men are much less likely to seek help for mental health problems, generally.

Societal norms in many nations suggest men should suppress emotion. This is probably even more a factor for fathers, who may perceive their role as being practical and providing for the family. Fathers – especially first-time fathers – might experience many sudden changes, including significant reduction in family income and altered relationships with their wife or partner. These are major risk factors for depression in fathers.

The importance for supporting fathers at this time is as vital as it is for mother. Evidence suggests that a father’s depression can have a damaging effect on their child’s development. Despite this, it has been shown that fathers are also less likely than mothers to seek help, and that health professionals are less likely to consider that fathers need support, compared with mothers. More evidence is needed to build a case that fathers need support as much as mothers.

It has been argued that, until recently, health professionals have been poorly equipped to recognise and treat mental illnesses associated with the birth of a child. Recent campaigns in the UK have led to changes in policy, funding and health guidelines. However, the recent revision of the National Institute for Health and Care Excellence (NICE) guideline on perinatal mental health does not address fathers’ needs. Despite a campaign to address this having support from several professionals and academics, a NICE spokesperson told the BBC that guidelines are unlikely to be changed as there is no evidence that men experience postnatal depression. However, if we discount hormonal factors in new mothers, the remaining risk factors for postnatal depression also apply to fathers. And we need support that recognises that.

Lockdown: do you feel mentally, physically or emotionally threatened? Here’s where you can turn to for help

Ways to help you bond with your baby 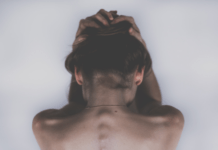