Going to London with small children isn’t for sissies, says Dr Stephanie Sieberhagen. When her partner’s mother (then aged 78) moved to England with her new husband (then aged 80), it didn’t take a Tarot reading to know they had some travelling in their future. She tells her story…

So, the bell tolled for us the previous October and there was no way of leaving the new grandchildren out of the adventure. They say in rugby “that player is really committed”, meaning the poor bloke is willing to whirl himself at a player the size of a brick out building, running at Cheetah-like speed, legs pumping like pistons, without a thought for the grievous bodily pain he will be experiencing as he connects perchance to tackle his opponent.

Well, in a very not dissimilar way at all, we committed ourselves to the task of planning and preparing for our two-week adventure. One of the weeks would be spent in the retirement village in Winchester – we put that aside as a soft option for later analysis – but drew ranks on the battle of London.

Soon we would be swallowed up into a labyrinthine metropolis with its millions of inhabitants, half of whom were surely going to be intent on stealing our children Rohen and Connor (aged six and seven respectively at the time) and selling them into child labour goodness knows where, and the other half would be fully focused on the national pastime of getting on and off the public transport system and finding their way to some place of work or play. In other words, they would, in our minds, resemble the milder sort of bulls during the run in Pamplona.

Lessons with the children had to start straight away.

We practised getting in and out of the car at double speed. I stopped short of painting the car red, and we used our imaginations to turn our small white hatchback into a towering red double-decker bus. The stopwatch was called into play and points deducted if any bags, water bottles or items of clothing were left in the vehicle.

Short trips to the school or shops took on a new meaning and excitement, as the countdown would start a minute before the car pulled into a parking bay.

Fever-pitched anxiety coursed through our veins as we got to standing positions, strapped on our equipment and tensed our muscles for the jump to the curb. The children, to their credit, really got into the swing of things. After a few weeks of this, the locals in our small village of Fish Hoek must have cottoned on, because as my little car approached the designated stopping point, an inevitable crowd would gather, cameras poised. When we finally arrived, sweating and poised for action, the ‘Chariots of Fire’ music blaring on our inner stereos, there would be high fives all around as we set about our chores in town.

Trips to the library were followed by art sessions during which we drew the Tower of London, the London Eye and the Salisbury Plain. Lessons included readings on British history, with a specific interest in the etymology of London street names and the British English names for things like police officers, taxis and drinking establishments. It reminded me of how brutal history can be and after a couple of sessions which ended on the theme of “off with his head”, we shifted to geography and meteorology instead (not that the English weather is a safe topic by any stretch of the imagination).

In short, we told the children as much as we could about the history of London, stranger danger and the limits to which a South African Rand could stretch and with all this out of the way, we started exploring the possible places we might be able to visit while we were in London Town. We decided on one activity in the morning, a lunch somewhere, and another activity for the afternoon.

From all the sources on the Internet as well as books, we finally whittled the list down to 99 places of interest.  London has a looong history! We had three full and two half days. My partner and I sweated blood when we started striking all the ‘adult’ places of interest off the list. The Tate, Buckingham Palace, the National Gallery and a drove of others, arguably the main reasons we would have wanted to visit London, became confetti as we voted in favour of Hamley’s Toy Store, Madame Tussauds and The Princess Di Memorial Park for children.

We compromised on a boat trip on the Thames, Mama Mia at the Novello Theatre and the London Eye as activities that we could all enjoy, while secretly making a list of our own for our next visit (sans offspring).

“The weeks of planning and practising had this extra bonus – two weeks away might not be very long, but if you add the weeks of preparation, it becomes a real adventure.”

The Jubilee Gardens Playground and 4D show at the London Eye were delicious bonuses, as we didn’t have to make use of any extra public transport to get us there and provided the adults with a much-deserved coffee moment while the children could play (gratis). We even managed to take turns at shopping in Regent Street while the children were chaperoned through Hamley’s (eyes straight ahead, no touching).

Our accommodation was with friends in Hampstead Heath and although nothing beats staying with locals when you travel abroad, having chosen a spot so far out of the city centre ended up being our one regret. On two of our three precious mornings, we forgot something at home and after having arrived at the very doors of our much-planned tourist activities, we would have to spend another agonising hour-and-a-half going back to the home on the Heath to go fetch.

This, therefore, our valuable travel tip – stay close to where you want to be. Time is money when your air tickets cost you 20 times as much as your first car, and wasting hours travelling eradicates any savings you make on free accommodation. The first few trips through the city were enthralling – so much to see, so many pictures to take, but by the fourth time you take the same route on a single day the novelty wears off.

We enjoyed traditional fish and chips while the children chased pigeons next to the Tower of London, and stumbled upon two more travel secrets when travelling with children:

After our few days in London, we headed back for Winchester and the family fold. Our friends and family had arranged boxes full of toys, and laptops were roped in as make-shift DVD players. On the road and in the air, we resorted to activity packs that were meticulously prepared and packed at home. The weeks of planning and practising had this extra bonus – two weeks away might not be very long, but if you add the weeks of preparation, it becomes a real adventure.

Knowing that the same would be true of the aftermath – out of sight out of mind – I immediately set to creating a scrapbook. Our tickets, slips, pics and the children’s drawings are safely ensconced in an old-fashioned leather-bound photo album full of quotes and memories that we re-visit often and would otherwise have forgotten.

I’m very glad I’m only writing this short opinion piece now as the proof is in the pudding – the children haven’t stopped talking about London! 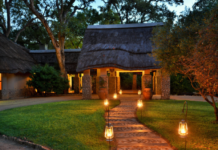 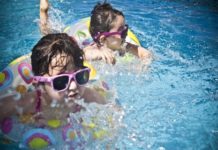 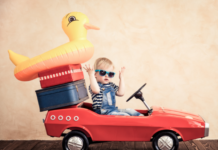 Road trip with toddlers: A how-to survival guide for parents in SA 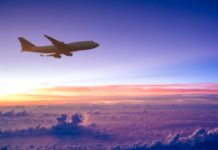 Flying with a newborn baby in South Africa: tips & advice

What we learned when travelling with our Slytherin Baby 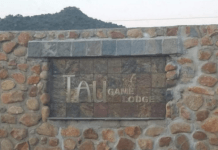 The tug of Tau Game Lodge