BabyYumYum.co.za
Home Articles Preschoolers How to make the most of mud play with your kids

Marcia Sissing (the creative mind behind the blog ‘Mini Matisse Diaries’) recently came to the realisation that her three daughters just don’t know how to be bored! Over holidays or weekends they’d often complain that they didn’t know what to do, or would ask if it was TV time yet. Here, Marcia shares her boredom-busting mud play tips…

I sat there thinking that I was never like this when I was a kid. I loved being outside; I actually even used to cry when my mom called me inside to come bath cause I wanted to stay out longer. We climbed trees, played with sticks and stones, and were covered in dirt and mud half the time. We used our imagination when we needed to make plans; we played and played hard. I can honestly say that the one thing I looked forward to the most was playtime. So, on one warm, sunny day after I had heard the 50th “I am bored mom!” I lost it and started lecturing the girls. At one point I actually said the words “When I was younger…”

Even just plain old mud was glorious for us. We pretended to cook with it and got covered in it while we played. Actually, if I think about it, it was our version of play-dough  as we moulded things using mud. Basically, the garden was our oyster box and we relished every minute we played in it. As I looked around my garden for inspiration, I realised that we had plenty of soil and so, without hesitation, I decided to introduce my kids to the “Art of Play”.

I can tell you that it didn’t go as smoothly as intended. Firstly, one of the kids didn’t want to get messy and we had to wash hands every two minutes. The next one just wanted mainly water and no soil, while the other just wanted soil with hardly any water and it had to be kept in a closed container! Could they have made mud play any more complicated? Eventually, they got into the swing of things and started to enjoy playing with mud, and mud cakes became a thing to do every other day. But our 21st-century kids can only stay fascinated for so long, so I knew I had to up my game to keep the love for mud going. After much Pinterest surfing, I found a recipe for marvellous mud.

I’ll share it with you because, like me, you may be close to the edge or rather close to pouring a glass of gin to drown the umpteenth “I am so bored, mom” ringing in your ears. It’s actually so simple and the effects led to great screams of joy and laughter by my girls. In fact, my youngest daughter was convinced her mud pie was volcano porridge.

By adding some bicarbonate of soda into the mud mixture and then pouring vinegar onto it you get some exploding mud! And to up it another notch, we added colour to the mud by sprinkling coloured chalk that we had pounded, so we ended up with colourful, exploding mud – and hours of entertainment for the girls who gained a deeper love and appreciation of mud.

The leader Rasool Allah said it so perfectly: “Children are content with the least of things. Gold and mud are the same in their eyes.”  So, if you need help getting them to love mud again, here is the recipe for the next generation of mud play!

To make marvellous magic mud you will need:

How to make marvellous magic mud:

Have fun! The results are stunning and perfectly imperfect. 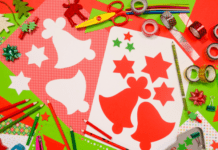 Easy & creative kids’ activities you can do with household items