In the past 20 years there has been a massive global push for mothers to exclusively breastfeed their newborns for the first six months of their lives. The science suggests this is a good way to improve their children’s later development.

There has also been a large body of research on the effects of formula milk, and other replacement foods, on the health of babies during their first six months. A great deal shows that they have negative effects.

But for many years HIV positive mothers were advised to either exclusively breastfeed their babies, or only feed them formula. They could choose which they preferred – but not a mixture of the two.

This was very confusing for many mothers. Many fell back on mixed feeding. They started using both approaches as the same time – sometimes breastfeeding their babies, sometimes using commercial formula or other replacement liquids and foods.

In South Africa this practise was very common – close to 90% of the country’s babies were mixed fed in the early 2000s.

In 2010 this changed. The World Health Organisation took a stand and recommended that governments should make a choice between the two options. They either had to encourage HIV positive mothers to exclusively breastfeed or to exclusively formula feed. They shouldn’t do both.

These guidelines prompted South Africa to end its free formula programme in public facilities. Instead, it promoted exclusive breastfeeding for all mothers. This meant that frontline health workers, including nurses and clinic staff, had to change they way they counselled mothers about feeding practises.

Seven years after the new policy was introduced we wanted to find out how well frontline workers had adjusted. Did they understand the new policy and its purpose? And did it make a difference to breastfeeding rates?

Our findings were surprising. When it came to HIV positive mothers, the frontline workers encouraged them to breastfeed their babies exclusively.

But when it came to HIV negative mothers, the workers didn’t highlight the importance of exclusive breastfeeding, nor did they discourage mothers from mixed feeding.

Our study suggests that South Africa could improve exclusive breastfeeding rates. The rate has improved in recent years – by 2016 32% of mothers were exclusively breastfeeding their babies. But there’s still a great deal of room for improvement. Kenya, for example, has achieved a rate of over 60%.

The onus is with the South African government to engage health workers about the benefits of exclusive breastfeeding for babies born to HIV positive as well as HIV negative mothers. They need to provide clear communication tools and counselling skills that can help health workers address the barriers mothers face.

Studies have shown that new mothers rely heavily on the advice they get from health workers about infant feeding.

That’s why our study focused on health workers. We interviewed frontline health workers from four community health clinics in Soweto. They included nurses, ward-based outreach team members and staff seconded from non-governmental organisations. Each of them had counselled mothers about baby feeding before and after the policy change.

Few health workers understood the scientific rationale of the policy to promote exclusive breastfeeding. Many were under the impression that the formula programme had been stopped due to costs and most hadn’t been trained on the new policy.

The health workers believed that breastmilk was best for babies and were able to rattle off the nutritional benefits and other advantages such as allowing the mother and the baby to bond and the fact that it was cheaper.

When they spoke to HIV negative mothers they spent more time warning them about HIV and advising them how to protect themselves. They did not emphasise the benefits of exclusively breastfeeding.

South Africa’s health department should provide health workers with updated information on the benefits of exclusive breastfeeding and the risks of mixed feeding. This needs to include pre-tested materials that can be placed in public spaces like clinics.

Health workers also need training on how to navigate between health education and counselling that empowers mothers. To get the best outcome for both mother and baby, a single directive from above is less likely to result in behaviour change than a two-way conversation about overcoming barriers.

By Sara Nieuwoudt, Lecturer, University of the Witwatersrand

Breastfeeding is not ‘easy’ – Stop telling women that it is 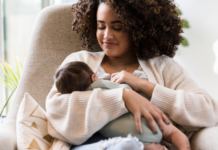 Why babies struggle to breastfeed: the often overlooked problem