BabyYumYum.co.za
Home Articles Parenting From babbling to talking: learning can be fun with Fisher-Price 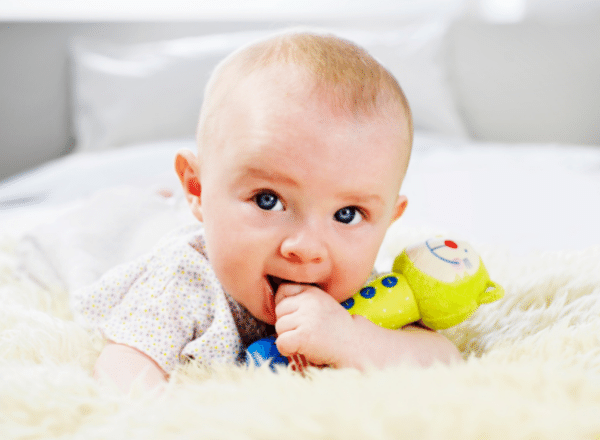 Parents are excited by every indication of developmental advance shown by their baby. ‘Look, he’s pushing his head up off the mattress!’ ‘Did you see her grab that rattle and hold on to it?’ These advances may not appear to be ‘great leaps forward,’ but they are. And the advances that perhaps produce the greatest delight in parents are those that offer proof the baby is becoming truly human—he or she is producing sounds that will eventually be shaped into words and used in communication. Nothing is more thrilling for parents, and in no activity are they more involved. Although the human infant is born with the capacity to become a talking—and reading and writing—organism, a great deal of loving care and nurture has to take place before this miracle is achieved.

More than just oohs and aahs

The earliest manifestation of this ability is the babbling that we hear babies doing from 2-3 months of age onward. When you go in to pick her up out of the crib, you hear ‘ahhh’ or ‘oooh.’ Chances are you will either repeat that sound or, in a higher pitch, say something like, ‘I think you’re ready to get up.’ With that response, she will kick and thrash about excitedly—and repeat her sounds. If you don’t say anything back to her when she babbles, or frown as you change her wet diaper, she won’t babble as frequently as she would if you had responded to her sounds. Thus, the first absolute necessity for parents who want to help their children move along the ‘Babbles to Books’ trail is responsivity. It’s so wonderful that, if we respond to our children as infants, they will respond to us. Language development moves along through that reciprocal process.

Your talking offers much more than encouragement, of course. It also provides a model of the sounds that register in the baby’s world. Research conducted at different sites over the last 30 years has consistently shown that infants in about the first six months of life can discriminate among all the sounds produced in all languages. But they gradually lose this ability and become unable to distinguish between sounds they don’t hear regularly in their home environments. So modeling is a key function for parents in helping their babies learn to produce the sounds that will mean the most to them in their daily lives.

The third key component is stimulation. All children babble, even those born deaf. But without responsivity to their efforts and good models to learn from, infants babble less and less. And, when they cease babbling, they are no longer practicing the complicated movements of the tongue and lips and other parts of our anatomical speech mechanism. Furthermore, their brains then have less opportunity to make the connections needed to relate sounds to other sensory information. But, no matter how much they babble, they still have ahead of them mastery of the technique of converting sounds into real words—real words that stand for real objects and real events.

Here is where stimulation is so important. Parents need to label objects and experiences for their pre-verbal infants. ‘Would you like your MILK?’ asks mother, stressing the word ‘milk’ and holding out the bottle before offering it. ‘Look, here comes DADDY. Let’s WAVE to him,’ as she takes the baby’s hand and makes a waving movement. (In fact, a wondrously effective way to comfort a crying infant is to hold him close and walk about the house just ‘naming’ or labeling ordinary objects: ‘Feel the WALL; the WINDOW seems cold; the DRAPES are soft.’ Word games, such as ‘Pat-a-cake’ and ‘So Big’ are wonderful during this transition period (from babbles to words), as they allow the baby to do something physically as part of the language game.

And don’t overlook reading to your baby as an important technique for providing stimulation. Some people think babies are too young to respond to books, but, if so, they’ve never read the right kind of book to an infant. Simple books, with plenty of pictures and few words to a page, are marvelous. Your local librarian will help you choose several excellent ones. Or, make up your own: snapshots from a family vacation put in plastic holders, with just a few words printed per page, work beautifully, as can clippings from magazines and catalogs. By the time children reach two years of age, a weekly trip to the library should be a must for all children whose parents are truly concerned with fostering language development.

How toys can aid development

Toys are a big help along this trail. Precisely because young children love toys and engage in activities with them during much of their waking time, they are important words to verbalize and get into the system. And talking with toddlers about toys provides an opportunity to bring verbs—much harder to master than nouns—into the conversation. ‘BRING me your truck.’ ‘TAKE the dolly to her bed.’ ‘Do you want to RIDE your horse?’ Children need to have verbs labeled as much as they do nouns.

The best-laid plans for guiding children will not be successful, however, unless they are delivered in an atmosphere of love and nurture. If you get upset when your 9-month-old still won’t imitate the gestures for Pat-a-cake after half a dozen sessions and say, ‘You’re going to get it this time—or else,’ forget it. He won’t do it. Sometimes, just about the only language children hear is either criticism or a command. And that kind of language world is not conducive to having a child want to talk.

There is a story told about Frederick the Great, King of Prussia, in the early 18th Century. (The story may be apocryphal, but I’ve seen it in many child development texts over the years.) He wanted to know what language children would speak if they never heard language, his theory being that they would speak Hebrew, the language of the Old Testament. To test his theory, he established a foundling home for a number of abandoned children. The caregivers were ordered to feed and change the children but never, under any circumstances, speak to them or to one another in the vicinity of the children. He never got the answer to his question, because all the children died. Without love and its bounty of touches and smiles and playfulness, life was meaningless and words had no chance at all.

As parents, we are not likely to allow such conditions of social and linguistic deprivation to exist in the lives of our children. We know that they have to have our love and attention and that the language they speak will be the language we speak. As they progress from babbling to talking with real words, we will help them by responding to their early attempts at vocalizations, by modeling appropriate language behavior for them, and by providing enough stimulation to guide and reinforce their efforts. In creating those conditions, it will be a toss-up as to whether our children experience any more joy in the process than we do.

Learning can be fun: The Fisher-Price® Lights & Learning Elephant

The Fisher-Price® Lights & Learning Elephant is a snuggly plush pal for baby who loves to sing and play. When little ones press the elephant’s light-up belly or feet, they’ll hear fun songs, sounds and phrases that introduce the alphabet, colors, shapes and more. With soft ears and a big friendly face, the Lights & Learning Elephant plush toy is an excellent cuddle buddy for your little learner. 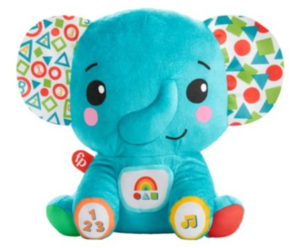 Our parenting advice is given as suggestions only. We recommend you also consult your healthcare provider, and urge you to contact them immediately if your question is urgent or about a medical condition.

5 exciting sandwich ideas for lunch (for kids and grown-ups!)