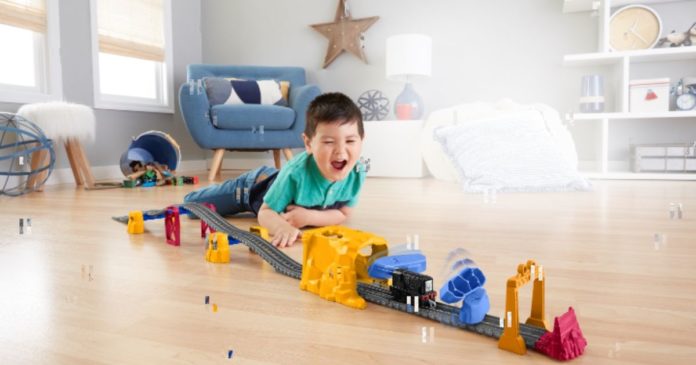 If your childhood was made up of a Fisher-Price telephone, activity board, bouncer chair or stacking rings, you might remember the happiness this iconic brand brought to your life. Fisher-Price celebrates its 90th anniversary and put together a timeline of their incredible history of creating toys for kids around the world.

They are also giving you an opportunity to win a Thomas & Friends set worth R379,99!

Scroll down to take a trip down memory lane and to enter the competition.

The Birth of Fisher-Price

Dr. Doodle and Granny Doodle were among the first toys created by Fisher-Price. Called the 16 Hopefuls, these early toys made their debut at annual New York City Toy Fair. The toys reflect the design influence of Margaret Evans Price, nationally known children’s book illustrator and wife of Irving Price.

On a cold, snowy day, the first shipment of toys left Fisher-Price, bound for R.H. Macy’s in New York City.

A small, unassuming building, located on a quiet residential street in East Aurora, was the first home of Fisher-Price. Located at 70 Church Street, it had once been a private residence, a copper shop and then a blacksmith shop. The new owners paid $5,000 for the building and began renovations, converting it to a toy factory. This tiny building housed both toy manufacturing and business offices for over 20 years.

The Big Performing Circus is introduced. This was the first playset for Fisher-Price. It was jointly designed by Margaret Evans Price and Helen Schelle.

A 20-piece wooden block set was part of a collection of developmental based toys called Preschool Toys. Herman Fisher enlisted his mother to help design the original line.

Hermann Fisher was an early pioneer of licensing. He creates the first partnership with Disney and the Mickey Mouse band, with Donald Duck being the best seller, outpacing Mickey Mouse! This was the first of many Fisher-Price Disney Toys to come. 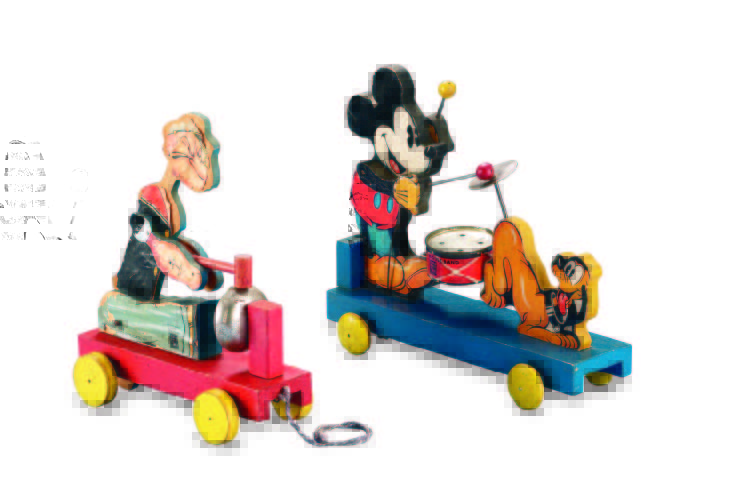 The company earned its first profit of $3,000 on sales of Pop-Up Pluto. Herman Fisher shared it with his employees in the form of silver dollars to demonstrate to shop keepers how good business is good for the whole community. Today, employees with 20 years of service receive original profit-sharing silver dollars!

Just over a decade after its start, the company stopped making toys for nearly four years, putting its manufacturing skills to work on Corsair aircraft parts, ship fenders and medical supply crates for the troops in World War II.

“If the war requires our entire plant, we will suspend toy-making for the duration,” said one of the founding partners Herman Fisher. To stay afloat during these four years, Herman Fisher comes up with an idea to write fun letters to retailers to keep them engaged and excited during this time, who stayed satisfied and excited for what was to come!

Fisher-Price became a trendsetter with the introduction of plastic to the toy industry with Queen Buzzy Bee, famous for its translucid plastic wing into a wooden toy, introducing the start of something bigger!

Plastic offered a whole new world of possibilities in the toy industry; it allowed to make more shapes and use more colours! When talking to Mums they even thought that Fisher-Price had a specific and unique type of plastic. 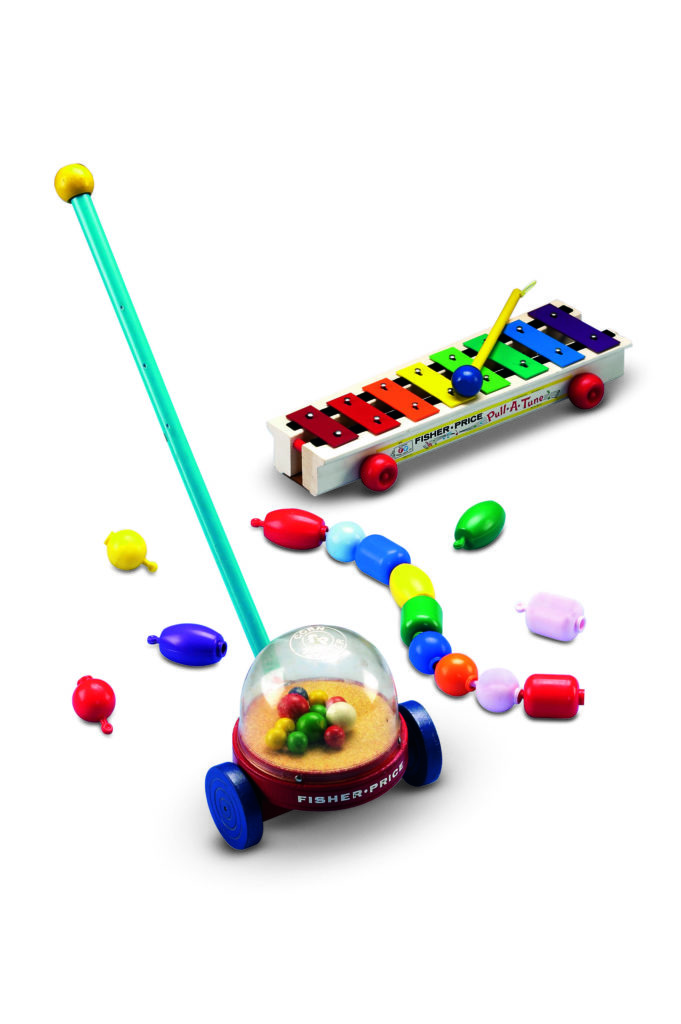 Out of this World

Long before there were men on the moon, there was a toy from Mars. Space Blazer, designed in 1953, was unique with a warming bell, spring antenna and a high compression, plastic dome concealing a little green Martian.

Fisher-Price has always pre-tested new toy ideas with children, but in 1961 it officially opened the Play Laboratory, a room designed especially for toy testing a first of its kind in the toy industry.

The Play Lab came about because Herman Fisher’s mum was a preschool teacher and Herm was inspired by her work and interested in observing children playing to better understand what inspired further exploration in kids.

So, he decided to split his office and used half of it to observe kids as they played. Later, when the 1st R&D building was built, Herman Fisher made sure that there was a space for a nursery school, where there was a one-way mirror so that the children could be observed playing with the toys – something that was unique in the industry!!

Fisher-Price today has more than 1 393 square metres of research facilities on campus and continues to test each and every toy that hit out shelves.

Down on the Farm

The #915 Play Family Farm was introduced. A classic Barn that is still in the Fisher-Price toy line today after several iterations, it continues to be a beloved classic showing a classic American scene. The barn is the background in the recent Let’s Be Kids brand advert inviting adults back into the world of childhood.

After finding a buyer he considered suitable to take the reins of his beloved company, Herman Fisher retired as Chairman of the Board of Fisher-Price Toys. With the strength and backing of the Quaker Oats world-wide brand, Fisher-Price began a decade of expansion and acquisitions, setting the stage for the company to become a world leader in toys and plastics manufacturing. During this time, the company increased its sales and advertising more than 10-fold. 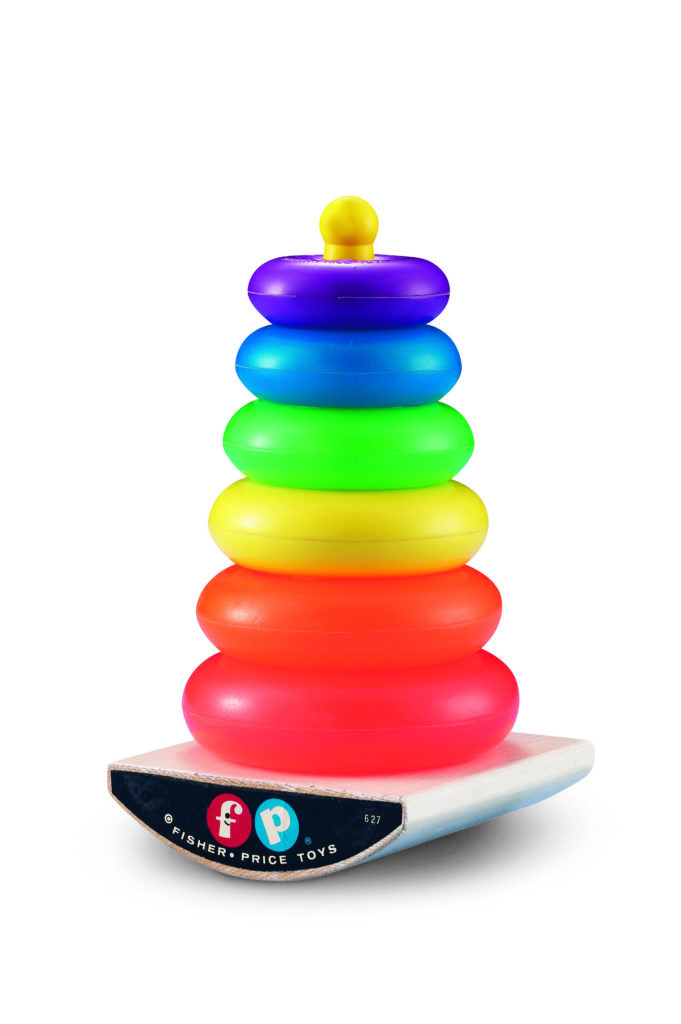 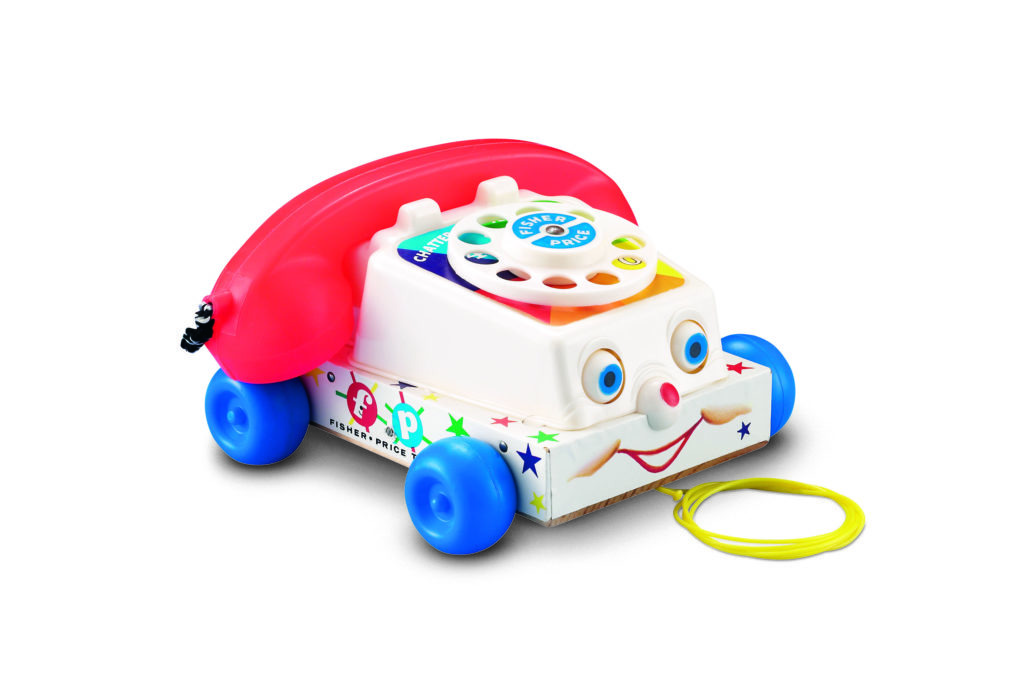 Turning the table on electronics

Keeping up with major changes in the industry, Fisher-Price introduced electronics just for kids. The innovative, solid-state Fisher-Price Phonograph was introduced as the finest child’s phonograph on the market. Able to withstand the roughest play, it became the forerunner of our popular Kid-Tough line of audio-visual products, specifically designed for children.

Features include a tonearm with a constant pressure stylus (to minimize scratches) a diamond needle that locked in place with the lid closed and two record speeds made this record player a staple for future DJs everywhere. 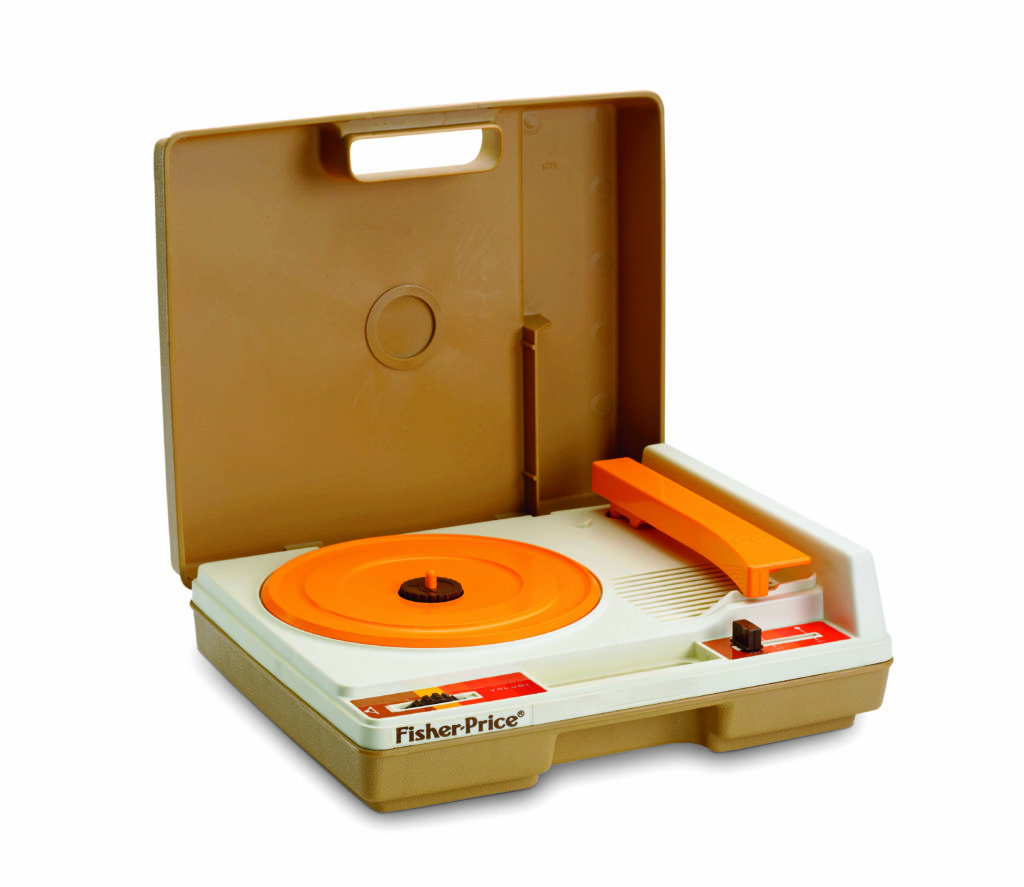 The 80s sees the arrival of the Tape Recorder –a revolutionary toy, mixing adult electronic concepts to child-friendly versions, durable and easy enough to use for children. This modern and innovative take on toys, found their way into even the most basic toys, animating the play-action in a whole new way. The mandate to designers was that tech would only be integrated if it added intrinsic play value – not just for tech sake to be trendy. A mandate still true today 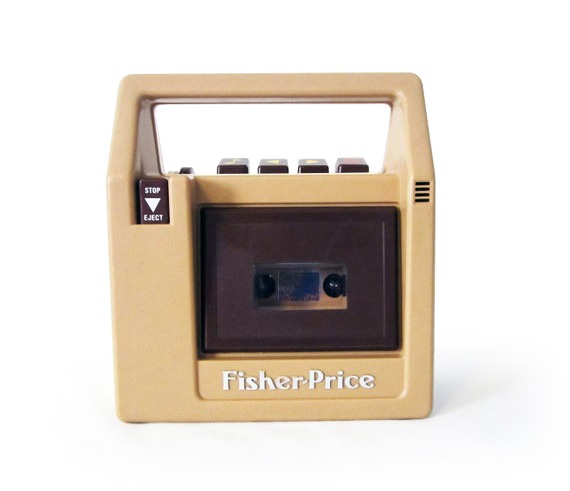 Entering the baby gear business was a natural extension of the Fisher-Price business. In-depth knowledge of babies and caregivers has helped Fisher-Price become one of the world’s leading brands in high chairs, infant swings, entertainers, bouncer seats, baths, potties and nursery monitors.

Many of the classic toys that have been designed at Fisher-Price are based upon childhood memories and experiences of the designers. Such is the case with the #2022 Bubble Mower. The designer who conceived the idea of having bubbles blowing from a lawnmower remembered the large plumes of smoke pouring from a neighbour’s oil-burning lawnmower during summers when he was a young boy.

Mattel, maker of classic toys such as Barbie and Hot Wheels acquires Fisher-Price.

A new line of action figures for boys is introduced. Rescue Heroes figures win the hearts of parents as the first non-violent action figures – and kids think they’re really cool, too.

The Little People friends continue to evolve with even more realistic detail as well as individual characteristics. The newest characters now have unique sculpted details such as arms, hands and facial expressions.

It’s a great time to be a girl!

As Fisher-Price continued to develop playset themes for boys, girls were not about to be overlooked. The re-styled Loving Family Dollhouse was a realtor’s dream! Seven rooms plus a fireplace, bath and built-in-appliances. Terrific curb appeal! Best of all it had location, location, location. Just fold up the sides and the house could be stored in your closet.

Laughing all the way

Imaginext toys take a walk on the wild side when remote-controlled dinosaurs join the pack. Fisher-Price has the official license for Jurassic World on the Imaginext range.

A multi-cultural cast of characters joins the Little People crew for more adventures and fun!

Who likes to move? BeatBo does! Fisher-Price creates a futuristic friend for preschoolers that even allows mummy or baby to record a phrase, and he’ll remix it into his favourite song. And through all the play, BeatBo’s introducing baby to letters, colours, counting, music, cause & effect and much more. 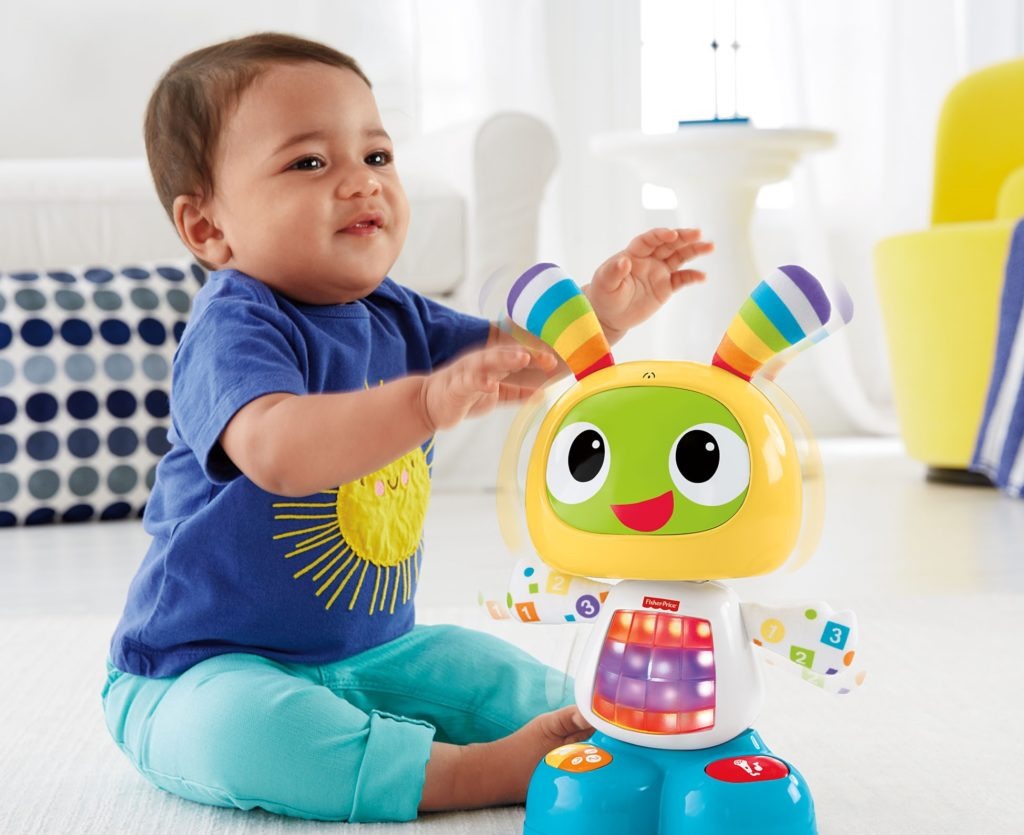 Code-a-pillar is one of the Think and Learn toys from Fisher-Price that goes beyond ABCs and 123s to help children learn how to think independently. Each toy fosters 21st-century skills like curiosity, experimentation and problem-solving in ways kids haven’t seen before. The toy becomes a world-wide must-have among the cool toys today

Introducing the Linkimals toys – a crew of favourite animal friends who love to sing and play together. These interconnected toys will sing ‘to each other’ when in close proximity creating a fun playgroup for baby.

Fisher-Price unveils a new brand campaign with Let’s Be Kids adverts which seek to invite everyone back into the world of childhood. Also, something else is different: Fisher-Price logo and look get an update too.

In 2020, during the global COVID pandemic, Fisher-Price once again contributes to society by deploying their design teams to produce face masks to help meet the significant demand for these supplies. Additionally, Fisher-Price releases a special edition line of collectable action figures and Little People Community Champions called the “Thank you heroes” #ThankYouHeroes. All net proceeds will go to #FirstRespondersFirst. 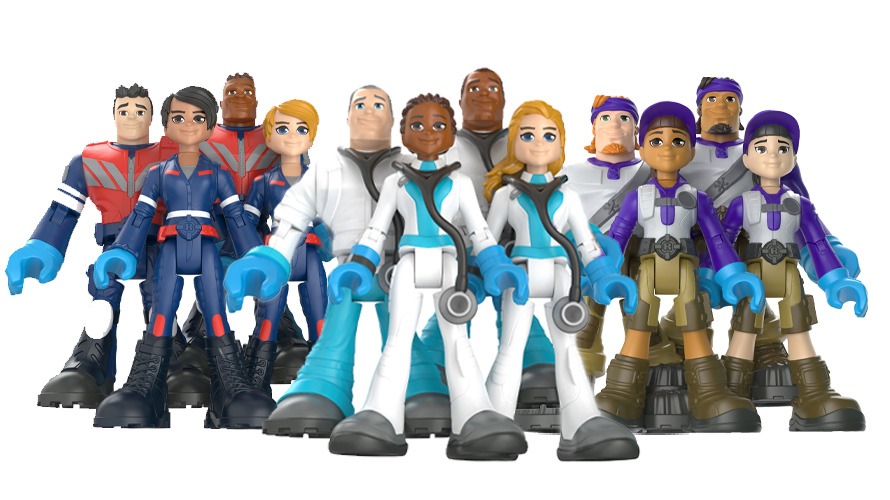 Stand a chance to win with Fischer Price + Thomas & Friends 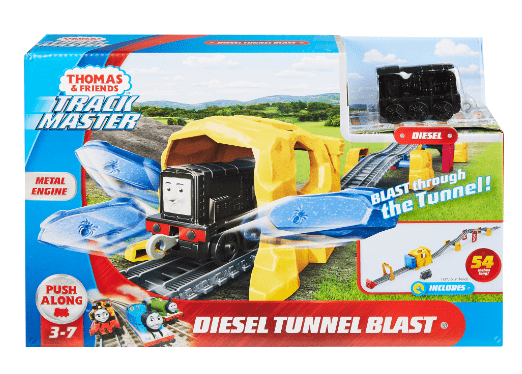 Preschoolers will love sending that mischievous engine, Diesel, racing down the track and blasting through the blocked tunnel with this exciting Thomas & Friends™ train set from Fisher-Price.

To stand a chance of winning a Thomas & Friends Diesel Tunnel Blast worth R379.99, fill in the form below.

This competition is now closed.

How to choose safe kids’ toys for Christmas

Smarty-pants with the smart stages tablet

Our deep love for toys

Parenting through a divorce: You never stop parenting no matter your...